Upholding the 2010 Delhi High Court judgment, Justice D.Y. Chandrachud said that the Centre's submissions that women are physiologically weak were based on a deeply entrenched stereotypes.

Dismissing the Narendra Modi government’s view that women are physiologically weaker than men as a “stereotype”, the Supreme Court on Monday declared that women officers are eligible for command posts and permanent commissions in the Army irrespective of their years of service.

A Bench of Justices D.Y. Chandrachud and Hemant Gupta said the time when women officers were seen merely as “adjuncts” of men officers was long past.

At the time of opting for specialisations in the Army, women officers could choose any available to men.

He listed 5G wireless technology, artificial intelligence as some of the emerging challenges which the scientists need to focus on

Prime Minister Narendra Modi has urged scientists to focus on real-time social issues being faced by the country such as malnutrition by providing value addition in agricultural products. Chairing a meeting of the Council of Scientific and Industrial Research (CSIR) Society in New Delhi on Friday, PM Modi emphasised on the importance of developing virtual labs so that science can further be taken to all students in each and every corner of the country.

According to a statement from the Prime Minister’s Office, he spoke on the need to attract young students toward science and further strengthen scientific acumen in the next generation.

The Prime Minister also suggested measures to enhance collaboration in research and development projects among Indians working in different parts of the world.

Asking scientists to work on the aspirational needs of India, he said there is a need for CSIR to focus on “real-time social issues that India is facing such as malnutrition“ through value addition in agriculture products, and water conservation.

PM Modi listed 5G wireless technology, artificial intelligence and affordable and long-lasting batteries for renewable energy storage as some of the emerging challenges which the scientists need to focus on.

He highlighted the need to combine traditional knowledge with modern science to develop world-class products. The Prime Minister also spoke about the importance of commercialisation of innovations, the release said. He exhorted the scientific community at CSIR to work towards improving the quality of life of the common man.

In the first phase of the budget session, the Rajya Sabha recorded 96% productivity with 155 members getting a chance to speak in a largely disruption-free session with a loss of only 96 minutes in its scheduled nine sittings.

Though the House was scheduled to have 9 sittings, not much business could be taken up as per the convention on the first two days of the session as the House was adjourned after the address of President to the joint session of Parliament and after laying of budget papers on the table of the House on the second day. On the third day, business could not be transacted due to disruptions.

Delhi election results: There will be no surprise in Delhi, based on counting trends. As predicted by exit polls, the AAP appears poised for a hat-trick of wins in the capital.

or now, it doesn't look the Delhi election results will surprise anyone who watched the exit poll broadcasts. On Tuesday morning, as votes were tallied, Chief Minister Arvind Kejriwal's Aam Aadmi Party (AAP) pulled into a commanding lead in early counting trends. The BJP was left with around 20 seats in a 70-member assembly. The Congress may draw a blank.

But, of course, it's still early days.

Though Delhi elections are normally three-way contests, this particular one was largely seen as a face-off between the AAP and the BJP. Arvind Kejriwal -- who will be chief minister for a third time if he wins -- touted himself as a good governance man, promised doorstep delivery of rations and offered spoken English classes and a patriotism curriculum to school students. The BJP didn't declare a prospective chief minister (a detail the AAP tried repeatedly to drum into voters' minds, in an appearent attempt to make the contest 'presidential') and its pledges included a subsidy on wheat flour and increased spending on health and education.

Campaigning for the Delhi election began in early January and was a conveyor belt for controversy. BJP officials were ordered off the campaign trail for targeting anti-government demonstrators in controversial public remarks. Protesters blocking a key highway at Shaheen Bagh, in particular, found themselves all too often in the BJP's crosshairs, an effort Kejriwal described as an effort to change the narrative of the election (He himself was reprimanded by the Election Commission and accused of trying to win votes by creating tension between religious communities). Kejriwal's knowledge of Hindu prayer and temple visits became topics of discussion.

As well, a series of shootings, none of them fatal, took place near the Shaheen Bagh protest site. Two of the gunmen shouted or wrote pro-Hindu slogans on Facebook. One of them was accused of links with the AAP, but his father denied that.

The AAP sweep indicated by counting trends mirrors exit poll predictions, though the BJP said these would fall flat. The lotus may well ending winning more seats than it did in 2015 -- a paltry three -- but losing will still sting. Since winning re-election to national government in 2019, the BJP has suffered two major reverses: a coalition win in Maharashtra that did not translate into power (the Shiv Sena broke away to team up with former rivals) and a straight loss in Jharkhand.

This is the third confirmed case of Indian nationals testing positive for the deadly coronavirus, which has claimed lives of over 1,100 people in China.

One more Indian has been tested positive for the novel coronavirus disease (COVID-19) on the quarantined cruise ship Diamond Princess off the Japanese coast, the Indian Embassy in Japan confirmed on Friday.

This is the third confirmed case of Indian nationals testing positive for the deadly coronavirus, which has claimed lives of over 1,100 people in China.

On Wednesday, two Indian nationals had tested positive, Indian government sources said. The Diamond Princess cruise ship, currently docked off the coast of Yokohama, Japan, has 3,711 people on board, including 132 crew members and six passengers who are Indian nationals.

“1 more Indian crew member on #DiamondPrincess tested positive for #COVID-19 and hospitalized for treatment. Earlier, 2 more Indian nationals had tested positive. @IndianEmbTokyo is in contact with all 3, whose conditions are stable and improving,” the Embassy tweeted.

1 more Indian crew member on #DiamondPrincess tested positive for #COVID?19 and hospitalized for treatment. Earlier, 2 more Indian nationals had tested positive. @IndianEmbTokyo is in contact with all 3, whose conditions are stable and improving.@MEAIndia @DrSJaishankar

In a statement released on the update of Indian nationals on board the Japanese cruise ship, the Embassy said that apart from the three people, no other Indian has developed any symptoms of the disease yet.

The statement added that the Indian Embassy in Tokyo has contacted all the three Indian nationals who had tested positive and are currently undergoing treatment at the medical facilities. 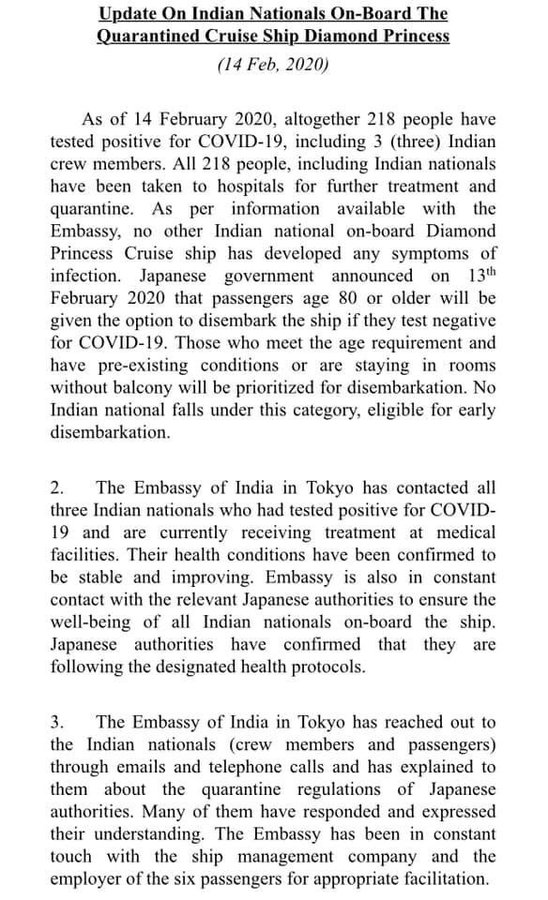 It added that the health condition of all of them has been reported to be stable and improving.

Japan quarantined the ship as one passenger who had disembarked at Hong Kong on January 25 was found to be infected with the virus on February 1. Taking into account the maximum incubation period of 14 days for the coronavirus, Japan has quarantined the cruise ship at Yokohama for 14 days.

The quarantine period started from February 5 and will end on February 19.

Some technical issue regarding visibility in cloud storage is being resolved soon, says Ministry spokesperson

The Ministry of Home Affairs clarified on Wednesday that all data of the Assam’s final National Register of Citizens (NRC) was “safe.”

A Ministry spokesperson said that “some technical issue regarding visibility in cloud storage was being resolved soon.”

IT major Wipro was given the contract to store the data in its cloud platform. The contract with Wipro expired in October last year and it was not renewed as the new NRC coordinator had not assumed charge by then, an official explained.

The data went offline leading to an uproar in Assam, with the Opposition questioning the move.

Gaurav Gogoi, Congress MP from Assam, tweeted on Wednesday, “The loss of NRC data in Assam is deliberate by the BJP.”

The National Human Rights Commission (NHRC) has issued a notice to the Uttar Pradesh Chief Secretary and the Director-General of Police (DGP), on a complaint filed by Congress leader Priyanka Gandhi Vadra over alleged police atrocities during anti-Citizenship (Amendment) Act (CAA) protests in the state.

The National Human Rights Commission (NHRC) has issued a notice to the Uttar Pradesh Chief Secretary and the Director-General of Police (DGP), on a complaint filed by Congress leader Priyanka Gandhi Vadra over alleged police atrocities during anti-Citizenship (Amendment) Act (CAA) protests in the state. The commission has given six weeks time to the UP government to reply to its notice.

"NHRC finds appropriate to direct issuance of notices to the Chief Secretary and the Director-General of Police UP, calling for detailed and specific reports within six weeks on the allegation mentioned in the complaint," said the letter issued to the UP government on January 29.

"Looking into the gravity and sensitivity of the matter the commission expects that the requisite report shall be sent within the stipulated time without any delay ' said an NHRC statement.

Priyanka Gandhi had moved the NHRC on January 27 accompanied by Rahul Gandhi that police allegedly used brutal force to crush the anti-CAA stir, that has claimed over 22 lives.

The Congress delegation led by Rahul Gandhi and Priyanka Gandhi had submitted a 538-page memorandum along with 'proof' to the NHRC against the UP Police's 'brutality' against the anti-citizenship law protesters and urged a probe into such cases.

Rahul Gandhi had tweeted: "A delegation of Congress leaders presented the NHRC with evidence of atrocities against citizens of Uttar Pradesh by the state government, which has gone to war against its own people. The NHRC must act decisively to protect the idea of India and the constitutional rights of our citizens. The photographs have also been given along with CDs, there were 23 deaths but no FIR had been registered against the police."

Priyanka Gandhi had visited many victims and their families in western UP, which was the worst hit by the violence which broke out in December last year.

She visited Bijnor, Muzaffarnagar, Meerut and Lucknow to meet those at the receiving end of the violence and also joined protesters on a dharna at India Gate here to express solidarity with them. The party also held a symbolic protest at Rajghat.

At least two dozen persons were killed in alleged police firing in Bijnor, Meerut, Kanpur, Firozabad and other places during the protests.